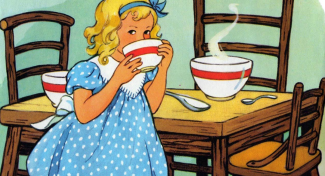 Too Hot, Too Cold…or Will the Fed Get It Just Right?! 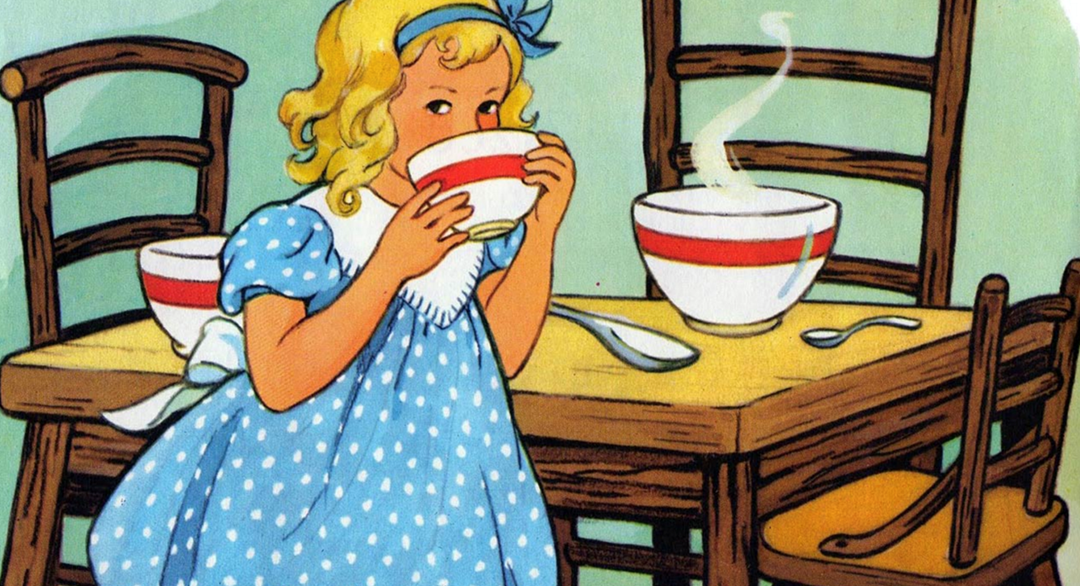 It was almost exactly a year ago that the US Stock Markets were at all-time highs, our portfolio values were wonderful, and investors were optimistic. But last year we also had an appearance of a specter from the distant past– inflation. At the beginning of last fall the official CPI number was just over 5%, a level that had not been seen in the US since the last century.

The FED and our government leaders assured us that there was not much to worry about. Transitory was the buzzword of the day, and official pronouncements were that inflation would soon abate. 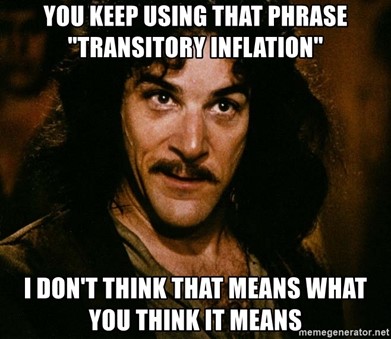 Unfortunately, the FED and our leaders were wrong, and the inflation numbers roared upwards.
By March the FED stepped in to raise rates and kept on raising them through the year.

The consequences in the investment markets have not been pretty. Stocks have had an extremely volatile year dropping sharply early on, and the remainder of the year has been a roller coaster of drops and recoveries. Bonds are suffering their worst year in history. Except for energy stocks, there has not been much for investors to be happy about in 2022 as almost every major index is negative.

As we look forward to 2023 – all eyes are on the FED and their response to inflation.

Do you recall the fable “Goldilocks and the Three Bears”? She had a bowl of porridge that was too hot, another that was too cold, and the final bowl was just right. The FED, as they plan a future rate increase, faces the same dilemma as Goldilocks. They must be careful that their rate policy is not too hot or too cold, but rather just right (they hope).

Let’s roll the calendar back 40 years to the last time we had high inflation in the US and examine how the FED acted back then. You might recall, if you are old enough, that the 1970s were marked by the same two economic maladies we suffer today: extremely high oil prices and government policies that were making inflation worse. Back then the Arab oil embargo caused oil to skyrocket, and both Presidents Carter and Nixon may have been to blame for unfortunate leadership decisions. By 1980 and the election of Ronald Reagan, the US had endured several years of inflationary damage. The FED chairman under Reagan was Paul Volcker, a tough guy who was determined to crush inflation no matter what it took. 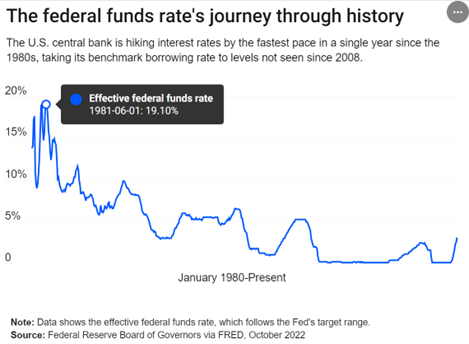 Volcker raised rates to 19% (the current rate as of 11/2022 is just under 4%) and succeeded in stamping out the fires of inflation, but in the process sent the US into two crushing recessions in the early 1980s resulting in soaring unemployment, financial hardships for many families, and dismal stock performance.

There was a happy ending, however. After recovering from a horrible recession, the US economy and stock markets soared for the remainder of the 1980s and all of the 1990s in what some consider the best decades of economic growth for our country.

So how does that history apply to today?

Too Hot – FED Raises Rates too Much

“The successful Volcker disinflation in the early 1980s followed multiple failed attempts to lower inflation over the previous 15 years. A lengthy period of very restrictive monetary policy was ultimately needed to stem the high inflation and start the process of getting inflation down to the low and stable levels that were the norm until the spring of last year. Our aim is to avoid that outcome by acting with resolve now.”

Many market observers worry that the FED will raise rates too much, and, in the process of trying to stop inflation, they might also damage the economy just like Volcker did in the 1980s. The early Volcker years were characterized by high unemployment, double digit mortgage rates, poor stock market returns, and just general economic misery.

If the current FED is Too Hot – what might that mean to investors today? If the 80s are a guide, the stock market may continue to do poorly – perhaps dropping to even lower levels.

If that scenario happens, the key for an investor to survive or even thrive in a downturn is to secure their income needs so they will not have to sell investments while the market is doing poorly. We are not able to time the market, but we can help you Time your Income Needs.

We have been reviewing our client’s income plans to establish how much income they might need to draw from investments. In many cases we are raising cash to pre-fund future withdrawals for income with the goal of maintaining our lifestyle even during a stock market drop. History tells us that it takes about 3 years (or less) for full recovery after a downturn. With that in mind, a conservative investor could try and secure 3 years of planned income in order to be able to endure a sour market period and to wait for better days ahead. It would be optimal if we could persevere through and even enjoy a normal lifestyle, even during a big stock market drop. Securing income ahead of time might help with that goal. It might also give an investor time to wait for a “happy ending” like we enjoyed in the late 80s and 90

Jerome Powell, the FED chairman, is under intense pressure by politicians, investors, and businesses as rate increases cause pain in almost every corner of the economy. Additional rate increases will cause even more agony. Some observers believe that the FED will have to stop or slow rate increases soon. Wharton economist Jeremy Siegel stated on CNBC last month that:

“I think there’s going to be a pivot soon. What scares the market the most is the Fed is going to stay this tight through 2023, which I absolutely think would be really a disaster for the economy.”

What does that mean to investors? Professor Siegel thinks that the Dow will jump 20 percent if the FED pivots on rates, and the market performance in early November supports his opinion. When the latest CPI (inflation) report showed that inflation was slowing a little, the US stock market soared in response and had back-to-back days of huge gains. Investors were anticipating that lower inflation means that the FED is done raising rates, and they bought stocks and pushed up stock prices in response

As investors we might be quite happy to see a robust stock market recovery. However, if the FED does not raise rates enough, it is also possible that inflation may remain with us. Generally, inflation favors those who own assets (real estate, stocks (especially dividend payers), a business, farms, etc.) as those assets tend to appreciate with inflation. Unfortunately, people who do not own assets tend to get left behind during times of high inflation.

If the “too cold” scenario happens, we will want to review our portfolio diversification and lifestyle to evaluate the possible impacts of inflation and see what we can do to best mitigate the personal impact on our financial lives.

What we are all hoping for is the FED will raise rates enough to control inflation, but not so much that they cause further economic misery – the Goldilocks bowl of porridge that is just right. We are watching and cheering them on, and that is the best-case scenario for investors and our country.

I am an eternal optimist – however the FED has a spotty record at steering our country through financial crisis. Mariner Eccles during the Great Depression, Arthur Burns during the inflation of the 1970s, Alan Greenspan who presided over the tech crash of 2000, and Ben Bernanke who some assign blame for the Great Financial Crisis of 2008-09 are just a few of the FED leaders who historians have criticized. We will be watching the FED closely with hopes that they have the wisdom and fortitude to make optimal decisions for our country and economy.

Finishing on a potentially positive note – stock market history tells us that the third year of the presidential cycle has a much higher average return than the first, second, or fourth year. In fact, during the third year, the S&P 500 has been up 81.8% of the time since 1928. It would certainly be a pleasant relief if next year followed this trend! 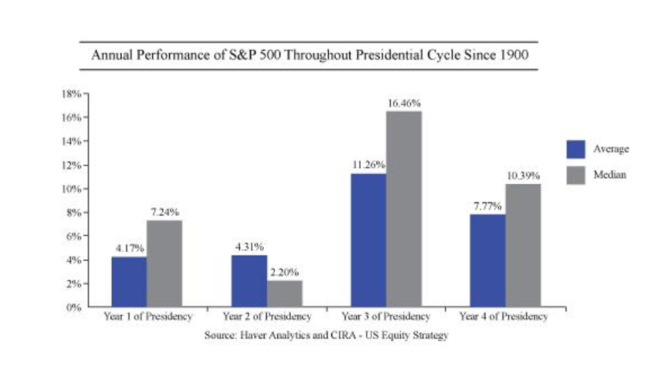 Too Hot – Secure your Income and get ready for a tough season.

Too Cold - Rates moderate and the stock market may recover, but inflation could remain high.

Just Right – Back to some level of normalcy.

We can discuss this and your personal situation at our review meetings, and as always, please feel free to reach out if you have a question before your next scheduled appointment.

(Thanks, and credit to Garrett Grigas CFA and Trey Gevers CFP for the concept and research for this article.)

The Gevers family plans to celebrate Thanksgiving with our growing family and friends, give thanks at our church, and maybe fit in some mountain bike rides, runs, workouts, golf, and naps as well. We live in a wonderful country and enjoy so many blessings and opportunities here!

Happy Thanksgiving to you and your families! My hope for you is that

“You will be enriched in every way so that you can be generous on every occasion, and through us your generosity will result in thanksgiving to God.”